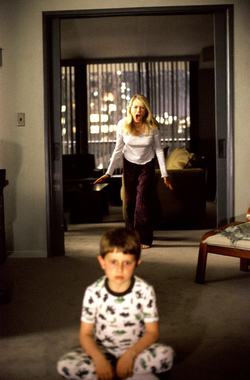 One of my favorite aspects of watching – and re-watching – a good horror movie is finding the gap.

The gap is that sometimes subtle but always important place where you move from the ordinary world – where most horror movies start out – into the UN-ordinary world where all the horrible stuff happens.

Some movies have more than one gap, so that the world becomes an incrementally stranger place for the characters involved. Others, on the other hand, have one very definite point where we and the characters realize (to borrow a line from a non-horror film) that we are not in Kansas anymore.

The Ring’s first scene, in which the two girls are talking about the urban legend of the killer VHS cassette, plays brilliantly with the viewer’s gap expectations. We know it’s a horror movie, so we know that at some point these two unfortunate young women are going to have to realize that the world is no longer the safe-and-ordinary place they so foolishly thought it was. But when’s it going to happen? Again and again, Gore Verbinski makes us think the moment is at hand, only to pull back and say, in effect, “just kidding.” When the first real gap moment comes – with the water on the floor – we are so tired from being pulled back and forth that the full-fledged, top-speed gap crossing that then occurs (when we as viewers are sucked into the TV) is twice as scary and unsettling as it would have been otherwise.

One of the many qualities that make Hostel (in my new opinion) a classic horror film is the quality of its gaps – both visual and situational. The first moment when we know we are stepping from the knucklehead fun-and-games atmosphere of the film’s beginning into deeper, scarier waters comes with King-of-Swing Oli’s casual remark on the train that he is not, like Josh and Paxton, a young man free of responsibilities, but a divorced father. He is? Wow. Isn’t that… kind of creepy? With that one detail, we are set up for the fact that from here on out, gap after gap, the fun is going to keep steadily going out of the movie, until we are left in hell itself. (The best visual gap in the film, meanwhile, is that gorgeous shot of the no-man’s-land that Paxton must walk across to enter the torture/horror factory. Once he has crossed it, we know instinctively that he will be in the inner sanctum of horror, where all the rules of the normal, outside world have been left behind completely.)

I’m a sucker for high-end gap symbolism. My favorite single example of this would have to be the shot of the hanging stopwatch with the nail driven through it that we see for a moment when the kids are exploring the farm in The Texas Chainsaw Massacre. The translation of this shot? Ordinary time has come to a stop – has been killed, in effect — and we are now in a nightmare world where time can either spread out or compress as it wishes.

The one thing that you can always bet on when it comes to the gap is that all of the characters concerned are going to be in denial that it exists (or all except one, but in that case no one will want to listen to them anyhow). In Jaws, Roy Scheider knows he’s in the gap when he and Hendricks find the crab-covered remains of Christine Watkins on the beach. But Mayor Vaughn? Classic victim of gap-denial that he is, he will hold out until the Fourth of July before admitting that he and the rest of Amity Township are deep down in the gap as well, and destined to stay there for a long time yet. It’s only with the last scene, as Scheider and Richard Dreyfuss are swimming for shore, that we realize they’ve made it out of the gap at last.

Or at least Dreyfuss has. Having signed on for Jaws 2, Scheider’s gap time was just beginning…