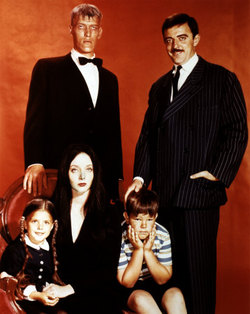 I have a few issues with the Texas Chainsaw Massacre, chief of which is its constant mention in any discussion of contemporary horror films and the constant use of its imagery.  That’s really not the fault of the film or of the folks quoting it or discussing it, I just get, you know, sick of hearing about it.  It’s like when your parents are all like, "The Beatles this and the Beatles that.  Beatles did it first.  Beatles Beatles Beatles."

It’s inescapable, and I’ve just had to suck it up and keep thinking about it and learning from it.  However, it needs to be clear pretty early in the conversation that the reviewer isn’t bringing it up to "shock" me or surprise me with its mention.  I get it.  It’s the Citizen Kane of horror movies.  It’s Sergeant freakin’ Pepper.  Tell me something new.

It came up a bunch at that critics table at the Museum of the Moving Image last Sunday, but at last in a way that I found fresh and a little different.  Maitland McDonagh described it as not just a hunt and destroy flick, but more a battle between two families and that a distinguishing characteristic of 70’s horror movies was that people in trouble would draw closer and come together in a crisis, whereas people brought together in current movies tend to fraction.
They’re all isolated with their iPods and their personal DVD players
and their PSPs and their mobile phones and their…blogs.

For more thoughts on this and for the joke that brought the house down, play the feud and take the leap.

Nathan Lee of the Village Voice used Dawn of the Dead as a specific example.  In the 1978 original the people trapped in the mall come together as a group and form a little family.  In the 2004 remake, the moment things start to go bad, the survivors all start fighting with one another.

The entire panel heaped praise on The Hills Have Eyes (both the original and the remake) for its depiction of a mutant family vs. a middle class family and how it represented not exactly haves and have nots, but more accurately two groups at different levels of society.

The middle class was described as having a leg slightly higher on the social ladder, and Adam Lowenstein suggested that the mutants were trying to eat that leg, a line delivered with such perfect timing and wit, that panel and audience alike totally cracked up.  I sure did.

For that moment we were all united as a ghoulish giggling family of fans.

That’s a total "literary" ending for a post.  I apologize.