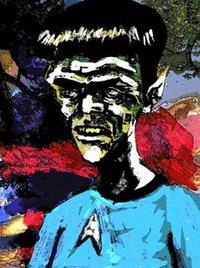 The Internet is a marvelous thing: it’s like humanity’s collective electronic brain, parsed one obscure fetish at a time. To give an example of what I’m talking about, it is no surprise that there is a large group of people out there who are sexually attracted to Star Trek’s Spock. This fetish contains practically every mother of the flower generation.

But were you aware that there was a sub-fetish of Spock lovers only attracted to Spock when he is drawn with garish ineptitude? Well, you do now.

Meet the Bad Spock Drawings Blog, a site which aims to post every Vulcan ever scrawled with a dull crayon on a wet napkin by a drunkard in the throes of delirium tremens during an Earthquake.

To be fair, though, some of the entries are far too gorgeous and surreal to qualify as “bad”: pot-bellied Spock pirouetting in a tutu, or a Cycloptic Spock with a purple aura floating in the middle of a Crayola meteor shower. Just goes to prove that there are no caveats about subject matter when it comes to the creation of immortal art!