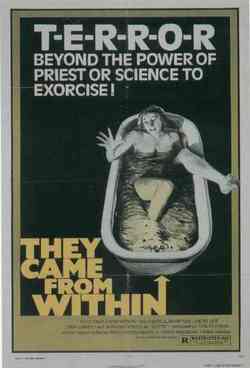 Mind-blowing talk at the Museum of the Moving Image this weekend.  Movie critics spoke about our genre of choice in such a clear and intelligent way, it was pretty inspirational.
I tell you, those who were not there should hold their bloghood cheap.

A lot of the topics were exactly what we’ve been discussing right here in our comment pages, and we’ll be writing about them all week.

They didn’t shy away from the number one hot topic, which has been the discussion of women as victims and what that means about horror films and fans  To judge from our boards, it’s either essential to the horror film dynamic or reason for its extermination.

Joshua Rothkopf, a critic for Time Out New York, suggested that all movies are misogynistic, it’s just that horror films are "honest" about it.  He singled out romantic comedies in particular as being worse for our idea of what it means to be a woman.

McDonagh agreed, and felt that the women in RomComs were portrayed as much weaker than in horror films, or even in her experience in life, with much baser desires and motives.

Adam Lowenstein pointed out that it’s from the horror genre we get characters like Ripley from Alien, and all of the panelists recommended the book Men, Women and Chainsaws by Carol Clover citing its concept of  "The Final Girl" which is summed up here.  It concludes with this:

"It
is necessary that this surviving character is female, because she must
experience abject terror, and viewers would reject a film that showed abject
terror on the part of a male."

So…what they were saying on the panel, and in this book, is roughly that women are the victims because it’s a power struggle we can "understand."  It’s less about men vs. women and more about strength vs. weakness.

There’s no neat solution, and some movies coming up seem to go to a far end of the extreme *cough* Captivity *cough*, but I thought a lot of this helped me think about it in ways I wasn’t able to before.

They also talked about torture, and you’ll get a blogful of it soon.