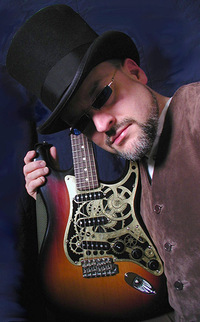 Over at my other gig, Wired, an interview I conducted with Jake von Slatt, a steampunk mechanical artist and hacker, has gone online. Jake Von Slatt is pretty much the king of the steampunk hackers out there today, building wonderful clockwork trilobites and steampunk guitars, and he’s got some fantastic opinions on why steampunk is more than an aesthetic fetish for brass, cogs and rust. He views it as wishful self-actualization.

Steampunk isn’t necessarily a term everyone’s familiar with, but it’s the mouldering conjoined skeleton attached to science-fiction’s pelvis. Science-fiction is essentially predicting the future from the contemporary technology and issues of the day; steampunk, on the other hand, is the extrapolation of today’s technology upon the history, politics and aestheticism of the past. It’s science-fiction applied retroactively.

Jake Von Slatt is pretty much the king of the steampunk hackers out there today, and he’s really got an interesting take on the allure of steampunk: essentially, in our extremely technologically-sophisticated society, the Victorian age represents the last great time when an intelligent person with a high school education “was given the complete set of scientific concepts to fully understand the technology of the age.”

In that sense, steampunk is about the mad engineer who formulates a plan to go to the moon by firing himself at it in a cannon. It’s a throwback to the retrofuturistic Victorian era showcased in classic films like 20,000 Leagues Under The Sea and George Méliès A Trip to the Moon, or even newer films like League of Extraordinary Gentlemen.