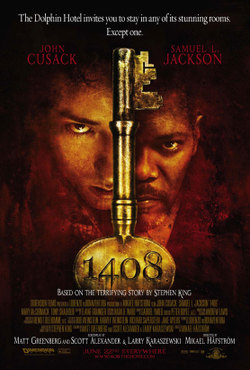 One of the next horror events on the schedule is the release of 1408, the latest in the genre of movies featuring John Cusak checking into a hotel.

It’s based on a story by Stephen King about a man who dares to spend the night in a haunted room, ye old "terror-dare" plot.

Here’s the question of the week:

Is there an author’s name they could put on a poster that would guarantee you would go to the theater to see the movie?

I have a guess on what the answer will be, but the boss tells me it influences folks’ answers if you print the hypothesis directly under the question, so…

Take the leap for my darkwinged guess on your answer, a bonus analysis of this poster, and a sub-question.  click below.

My hypothesis is there used to be, but not anymore.  In the 90’s they’d
slap Clive Barker and Stephen King’s name above the title as part of the advertising, but here, as you can see they’ve not only banished his majesty to the lower third*, but they’ve also felt it necessary to remind you he’s "terrifying".

It’s kind of schizophrenic, I reckon, since the coloring and design of the poster make it look like an adventure movie or even an historical quest movie.  The title doesn’t help, either, what with it’s suggestion of a date.  Why, if they hadn’t put that word "terrifying" in there and I was seeing the poster in a vacuum, I might think it was about a war between the Crusaders and Moors for the key to young Christopher Columbus’ footlocker.

Back to the topic at hand, even Dean Koontz and Peter Straub used to get some run, but those days are long over.  So, the sub-question is…Is the fact that an author’s name is no longer used to sell a movie a result of:

If it makes you feel any better, I saw a preview for (way out of our genre) the new Woody Allen movie in which they advertised it as being "from the director of Match Point".  Every Woody Allen movie for the last thirty years has been "a Woody Allen movie", but now they think his name is just as likely to scare you off.  Is the same becoming true for King?

*In fact, and here is the best joke you will hear about this movie in
the history and future of the internet, if you’re not careful you
might….Overlook it.