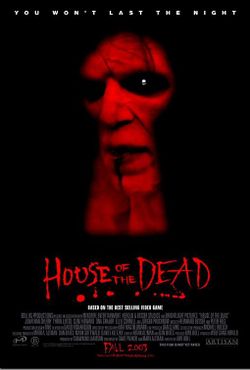 He screwed up the movies he made from video games. Now, Uwe Boll’s going to screw up the horror
genre.

In a not-very-in-depth article, The Hollywood Reporter spews
the news that Boll will write and direct a movie called “Seed,” starring
Michael Pare, which will drop next year.

To me, that’s a double dose of trouble. Remember what Boll did with the terrific
zombie video game, “House of the Dead,” back in 2003? The thing took place at an island rave, made
no sense at all and had scenes from the game spliced into the movie for no
apparent reason. It reminded me of those
oddly placed, hissing cat fight scenes in the movie “Maniac” from 1934. Horrible. But there’s more.

“Seed” not only sounds derivative, it sounds like something
I’ve seen so many times before. Here’s
the plot, according to IMDB: “Sam Seed, an insane mass murderer, is scheduled
for execution at the hands of Warden Wright. Before the executioner throws the
switch, Wright steps in front of Seed, "Do you have any last words?"
Seed, "I’ll see you again." After three attempts to electrocute,
complete with boiling blood that steeps from his eyes, he’s still alive. The
executioner, Wright & the doctor collectively agree, that the breathing
Seed be pronounced dead. He is bound and buried alive. After biting &
clawing his way to the surface, Seed, the blood soaked, enraged madman, is now
bent on vengeance. The reign of violence that follows will redefine the
boundaries of extreme gore, physical & mental torture explored through
cinema.”

Which is nothing compared to the “physical and mental
torture” the viewer of this debacle-in-the-making will likely endure.