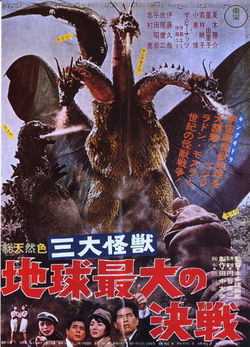 Yes, we know that Godzilla is king of monsters.  His movies were the first of the kaiju (giant monster films) and nobody ever did better. But when it comes to coolness, Godzilla is no match for King Ghidorah.  With his golden spikes, large wings and three heads, King Ghidorah was the only foe Godzilla ever faced who could be called truly formidable.  Why do you think they waited until the end of Godzilla: Final Wars to roll him out?

Now, Classic Media has brought us two reminders of the coolness of King Ghidorah with new DVD releases of Ghidorah The Three-Headed Monster and Invasion of the Astro Monster (also known as Godzilla vs. Monster Zero).  Both films prove that the Big G was never better than when facing off against King G.

Ghidorah was first introduced in Ghidorah The Three-Headed Monster, which was actually one of the most popular films in the series during its original release.  One reason for this (as stated in the audio commentary) was that unlike some of the earlier Godzilla films, it was made more with kids in mind.  As such, it’s certainly a very silly show, but all of the elements that made you love Godzilla in the first place are here: Three giant monsters, two tiny princesses and an otherwise incomprehensible plot that gets in the way of all the monster coolness.  This is also the one where we learn that the monsters could talk to each other, which makes you wonder why they didn’t just try and work out their problems by hashing them out instead of combat.

Ghidorah’s second appearance came only a year later in Invasion of the Astro Monster, probably best known as the one with those guys with the sunglasses and fishbowls on their heads.  Always one of my favorites, it finds the people of the Earth visited by seemingly begin aliens who want to take all of our giant monsters away to their planet in order to battle Ghidorah.  Turns out the trick’s on us, as the aliens are actually using the monsters to destroy the Earth, but that doesn’t last for long, as Godzilla and Rodan free themselves from the shackles of alien oppression to battle Ghidorah in a battle royale on Planet X.  And, yes, I took a lot of pleasure writing that description.

As with their earlier Godzilla DVDs, Classic Media has done another great job on these.  Both films are presented in glorious Toho Scope and the transfers look very good, especially considering their age.  You get English and Japanese language options for each (the U.S. versions of the films have some slight edits) with knowledgeable audio commentaries by Godzilla experts Stuart Gallbrath IV and David Kalat.  Each disc has short featurettes about the production personnel and original trailers.  No monster fan should be without these DVDs.