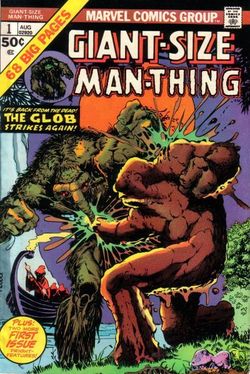 So, it’s no secret that in the 1950’s EC Comics, which usually had some kind of undead pun-o-phile narrator  revealing the deadly follies of greed or pride, were crazy scary and crazy imaginative.  You gotcher Creepshow movie series to help you remember.

It’s not exactly a secret, but less well-known, that the dread Dr. Wertham testified at Senate hearings about the "seduction of the innocent", wherein he suggested Batman and Robin were into each other and that horror comics, like the EC titles were harmful and dangerous to impressionable youth.

Almost a secret is that in response the comic industry sort of censored itself with that goofy Comics Code Authority (that Dentist Society lookin’ thing in the top right-had corner) and "washed" all of the creepy characters away.

You can stay here and snicker at the title Giant-Size Man-Thing, or you can take the leap to find out even more!

For about twenty years horror comics just disappeared, and the story of the mid 50’s to mid 70’s involves "corny" superheroes saving cats from trees or their girlfriends from clam shells, but Marvel comics started pushing the boundaries of the Code and brought the scary back by making the monsters heroes.

So, that’s where you get your Ghost Rider from and your Blade from and your Man Thing from (movies all!), the idea of sort of looking for a loophole in how you could use monsters again.  Just make them good guys.

It worked, you had all kinds of voodoo heroes and zombie heroes.  It helped that the old 30’s Universal movie monsters were suddenly
super-popular and kids knew them (probably because the copyright ran out on the original
materials and they were being remade and used in all kinds of ways).

So horror was back in the books by coming in the front door, the good-guy’s entrance, and by the 90’s most comics dumped that good for nothin’ code and things got properly creepy again.  But, and correct me if I’m wrong, with the exception of the first ten minutes of the first Blade (which are AWESOME), they haven’t quite gotten the super-hero monster movie thing exactly right.

Wertham’s innocent aren’t being seduced exactly, more like..depressed.  Help me out, lift my dark cloud.  Tell me a monster hero flick that works.