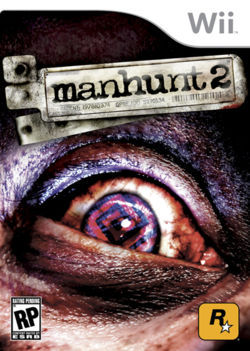 Ouch! The week began and ended in true horror for Rockstar games, the makers of the Manhunt 2, a serial killer offering which features more hacking and slashing than "Hostel" and "Saw" combined.  First, England banned the game.  Then Ireland followed suit.

Says Reuters, "Manhunt 2 casts the player in the role of a psychotic man who escapes a mental institution and kills enemies with a variety of weapons and objects as he tries to find out what happened to his family."

Although the game wasn’t banned on these shores, the games rating board gave Manhunt 2 an Adults Only rating.  For a horror game maker, that’s akin to a vampire being killed with a stake through the heart.  The dreaded AO rating means that the PlayStation 2 and 3, the Nintendo Wii and even the Xbox 360 won’t see versions of the game released anywhere. It also means Wal-Mart and Blockbuster won’t sell the game.

So where does that leave Rockstar Games?

It means that Rockstar can probably only release the game in PC format, and not that many people buy PC games to play hack and slash horror games.  They buy PC games to play role playing games and strategy games.  Said Rockstar via a press release, "We continue to stand behind this extraordinary game. We believe in freedom of creative expression, as well as responsible marketing, both of which are essential to our business of making great entertainment," the company said.

Well, they’re not standing behind it.  They’re stopping all distribution of the game as of today.

What’s it all mean?  The games industry is terribly frightened of controversy (much moreso than the movie industry), especially when it comes to Rockstar, which had a controversial hidden sex scene in the PC version of Grand Theft Auto San Andreas.  That means the First Amendment right to freedom of speech doesn’t mean much to the games poobahs if it hurts the industry as a whole.  I believe that the game should have been released and the market — folks like you and me — should have decided whether the game was a winner or a loser.

But the content of the game was raw, really raw.