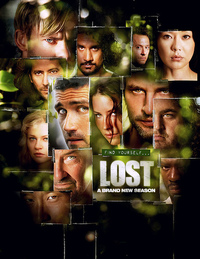 Rabid polar bears rampaging through sweltering tropical isles. Paraplegics mysteriously revitalized into fanatical, knife-throwing He-Men. Buzzing clouds of seemingly robotic insects gobbling up plane crash survivors. A mysterious string of numbers that curses anyone who speaks them alolowed. A button that must be fanatically pushed every 108 minutes, lest the world come to an end.

That’s just a very small overview of the unsolved mysteries of NBC’s Lost. Viewers have been chomping at the bit for the last three years, wondering what wonderful cohesive explanation can resolve all of the show’s tantalizing mysteries. And they’re not the only ones. Even the stars of the show are completely in the dark.

According to Marsha Thomason — who plays Naomi, the woman who parachuted to the island to find Desmond — "We’re as in the dark as the audience, really – maybe half a step ahead. We spend our whole time waxing about: ‘What’s that about? What does that mean?’ We don’t have a clue; we only know from episode to episode.”

That’s not really a surprise, of course, because the writers are clearly making it up as they go along. I seem to recall a departing Lost writer flat out admitting that the writers were in the dark about where the show was headed as early as season one. Of course, there’s nothing wrong with making stuff up as you go along: I’m informed that that’s the way most shows, films and novels are produced. It’s not a problem, in and of itself.

The real issue is less the introduction of mystery after mystery into the series and more the tone. Shows like The Prisoner left much unexplained, but the tone of that show was more surreal than conspiratorial. Lost, on the other hand, feels exactly the opposite: like a paranoid Illuminati conspiracy theorist breathlessly presenting his discordant, stream-of-conscious facts, there’s an expectation that they will all be pulled together in the end into a fascinating (albeit ridiculously implausible) over-arcing plot. It’s not surprising that a common complaint about the series is that it feels more and more like slow-stroke wankery as episodes go by, with no relief or culminating epiphany in sight.

What do you think? Is Lost actually going anywhere? Let us know in the comment section.