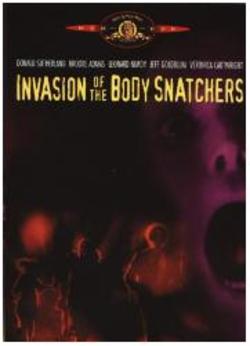 What’s the difference between the two? Is there a common ground where the genres meet and, perhaps, even overlap?

If there is, I know where it is to be found.

Pods. Stamens. Tendrils… Plant anatomy and behavior is creepy by nature, because plants are alive but not conscious – or at least not in the human sense of the term — and life without full consciousness is always scary.

The plant-that-is-more-than-a-plant – that is, vegetal life that does have a component of higher consciousness — is even more horrible, however, and for the same reasons that zombies and vampires are horrible: they blur the ordinary distinction between what is alive and what is dead.

When Jeff Goldblum discovers his vegetative double on the massage table at the mud baths in 1978’s Invasion of the Body Snatchers, he is forced to confront a fact that all of us must face at some point: we’re organic beings, and our individual, human consciousness relies upon impersonal, biological processes that we can neither fully understand or control.

Are those processes ultimately nice, nasty, or neither? In Body Snatchers, Jeff’s girlfriend (played by Alien’s Veronica Cartwright) is a flaky, well-intentioned proto New-Ager who talks to her plants and reads Immanuel Velikovsky. She’d like to believe that life is ultimately more than just a cold, vegetative, mechanical affair, and the possibility that it’s not is the real reason that Jeff’s vegetable twin is so scary to her.

Body Snatchers – in particular, the ’78 version – might just be the quintessential horror/science fiction crossover film — the place where sci-fi’s fascination with worlds beyond most effectively meets and blends with the horror genre’s fascination with worlds beneath. There are other horror films with thinking plants (or trees, in the case of The Evil Dead), but no other film stirs our sense of wonder at the vastness of the universe so effectively, only to flush it all, in the end, down Donald Sutherland’s sinister vegetable throat.