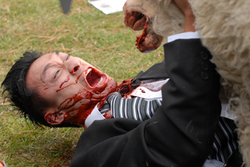 In all of the excitement of 1408, we forgot to mention this week’s other horror offering, Jonathan King’s New Zealand killer sheep opus Black Sheep, opening in limited release from IFC Films.  It is, for the most part, an entertaining throwback to the early days of Peter Jackson and Sam Raimi, when low budget genre filmmakers were determined to break out from the pack by making their works as much comedy as horror.

While horror comedies are not that uncommon these days (although the good ones are still rare), this was something particularly refreshing in the late 80s/early 90s and I’m sure it’s the reason the likes of Evil Dead 2 and Brain Dead (Dead Alive here in the States) remain so well regarded.

Watching Black Sheep reminded me of this time not so long ago
when you could surprise the audience by giving them as much humor as
horror, although the film’s premise (mutant sheep terrorize the New
Zealand countryside) does more or less tip the hat before you even step
in the theater.

While the film has its charms, it loses steam
with about a half hour to go and then you’re left with just the need to
resolve the plot and a lot more gore. But when it works it’s fun and I
really do have to stress that the film has its charms. By charms I, of
course, mean senseless violence and gore. I was also pleased to see the filmmakers
attempt to populate their film with likable characters as opposed to
just victims waiting for the chopping block (or lambs to the slaughter,
if you will) and are at least trying to tell a story.

The problem is that
there simply isn’t enough story to justify even a 90 minute running
time. You can only try to outwit and outrun a hoard of killer sheep for so
long before it becomes redundant and with this picture that takes about
60 minutes or so.

It is a beautiful-looking film, and the sheep FX in the film are excellent, as it’s
often rather difficult to figure out the animatronic sheep from the
real ones. The cast is fine (female lead Tammy Davis
is quite the cutie) and aside from an atrocious music score by Victoria
Kelly (and Casio, it seems) there really isn’t much to gripe about.
Black Sheep is fun for the most part and a respectable first film for
King.