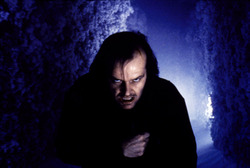 “It’s hot in here.” – Barbara in the original Night of the Living Dead

Heat or cold: which one is more conducive to horror?

Either one, as long as it’s extreme.

Consider, for example, the original Texas Chainsaw Massacre (along with Night of the Living Dead and The Shining, the standard by which, in my opinion, all other horror films should be judged). From the inferno-like opening shots of the surface of the sun to the claustrophobic dinner-party climax (which in real life was even hotter, sweatier, and smellier for the actors and crew than it looks on screen), TCM is one of the hottest films ever made. Watching it can make you sweat even if it’s snowing outside (though in my opinion the best time to pop it in for another viewing is a sweltering evening in July).

Just as TCM is the archetype of the hot horror film, The Shining is the archetype of the cold one. As befits a movie about ghosts, The Shining starts out in the first cool days of autumn, and gets chillier and chillier as it goes along. The climax, of course — in which Jack chases Danny through the labyrinth of the frozen hedge-maze — is a veritable orgy of ice. (The little spin-dance of angry impotence that Jack does when Danny and Wendy finally get away is, by the way, the cold equivalent of the chainsaw-swinging dance that Leatherface does at the climax of TCM when HIS victim escapes.)

Other films, meanwhile, don’t stick to one temperature but alternate between them. Though it’s toasty warm on the space ship Nostromo, for example, the home planet of the creature in the original Alien is so inhumanly cold and windy that it would be hard to imagine anything other than an H. R. Giger nightmare living there. Mary Shelley’s Frankenstein — and Kenneth Branagh’s tiresomely highfaluting but still pretty good adaptation of it — both end in the ice of the North Pole. But when James Whale brought Frankenstein to the screen back in 1931, he instead chose to finish things up with fire (in the form of the villagers’ torches that burn down the mill where the Monster holes up).

Chilliness was so central to William Friedkin’s vision of The Exorcist that he insisted on refrigerating Regan’s room so that the actors’ breaths registered on film (no CGI back then). The plummeting thermometers in The Sixth Sense, meanwhile, nicely added to the believability of the dead people that Haley Joel Osment saw but no one else did. And what would either version of The Thing be without the constant presence of all that cold Arctic air?

Robert Frost famously suggested that when it came to the end of the world, either fire or ice would do perfectly well, and the greatest poet of the TV screen — Rod Serling — agreed. His screenplay for the Twilight Zone third-season episode “The Midnight Sun,” which first aired in November of 1961, features a world that seems to be perishing from heat but which, at the last minute, turns out to be suffering from just the opposite problem.

The upshot? It’s not the heat (or the cold). It’s the intensity.