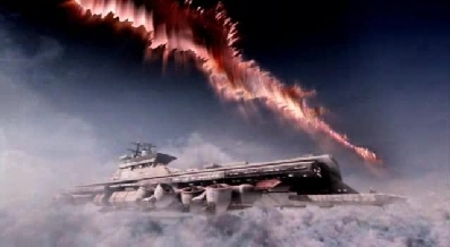 The latest episode of Doctor Who, "The Sound of Drums," was broadcast in the UK on Saturday night. Overall impressions on the Internet seem pretty positive, but my guess is that most fans are still so ecstatic at seeing the return of the Doctor’s greatest foe that they can’t see past him to the faults. Spoilers after the jump.

Last week, reviewing Utopia, I wrote: “John Simm hasn’t really been given more than 60 seconds of screen time to impress. But my initial impression isn’t that Simm is a bad actor, just that Davies’ vision of the Master is as questionable as many of his decisions… The Master is supposed to be an exquisitely hateful, charismatic and intelligent character: on the other hand, Simm’s portrayal is that of a petulant Puck, sarcastically shrieking “Bye bye!” at the Doctor as he zooms off in the TARDIS. For some reason, I expect a little bit more dignity out of my evil, immortal, time-traveling Time Lords.”

Still, I was hoping that initial impression was based on too little evidence. Time Lords experience regeneration insanity, so that was one interpretation. Another was just that I didn’t have enough of Simm’s performance to judge by.

Of course, Davies tries to explain all of this: the simpering fool watching Teletubbies was driven insane by looking into the Vortex of Time as a child. But in my view, that revelation goes even further towards deflating any sense of menace that the Master may have had. I prefer my evil Time Lords sane.

My guesses for next week’s episode are pretty unoriginal: despite the Doctor’s protestations to the contrary, I’m guessing that the Master is revealed to be his brother (the Doctor claimed “not to have a brother anymore” in a previous episode). I’m also guessing that those black Empire torture drones end up being resurrected Time Lords.