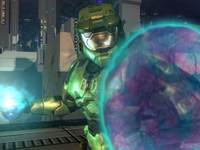 Filmwad is reporting that Fox has finally picked up the rights to Microsoft’s Halo franchise, a series of video games featuring a superhuman cyborg fighting for the survival of humanity on the inner curvature of a galaxy-destroying ringworld.

The film — originally set to be produced by Peter Jackson and directed by South American sci-fi director Neill Blomkamp — has been stuck in development hell for a while: last year, both Universal and Fox pulled out of a deal to back the picture, apparently balking at a budget that had risen over $135 million. With the script already penned, Fox getting back in the game hopefully means we’ll be seeing this sooner rather than later.

And here’s hoping: the Halo series features one of the most fleshed out and fascinating universes in video gaming. It even features a number of novels that were written based off the game universe that miraculously fail to suck. As for Neill Blomkamp, he may very well be a Hollywood unknown: that is not to say, however, that he isn’t a sci-fi visionary and utterly brilliant: