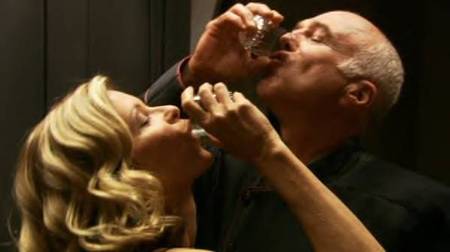 In the season three cliffhanger to Battlestar Galactica, four main characters — compelled by hallucinatory music (by Bob Dylan, no less!) that only they can hear — are drawn together and suddenly realize that they are Cylons. But some of the actors who play those characters are none too pleased about being outed.

Michael Hogan, who plays Colonel Tigh (a character who lost an eye to Cylons), says: “”I’m not happy about being a Cylon at all… I’m not imagining that anyone who were picked to be Cylons are. The scripts that we have so far are great, but the only way that I can deal with it is as a human being, and so far that’s [what my character] has had to do.” And Aaron Douglas is similarly upset that Chief Tyrol has been revealed as a Cylon.

You can understand the problems an actor might have about being outed as a Cylon after three seasons. If they’d known, they likely would have used it to strengthen their performance, and an actor wants to feel as if they have a full understanding of their character. But from one perspective, that’s probably the exact reason Moore didn’t tell then: to cut down on the number of conflicted shuffles or ominous looks that the actors might have put into their performance which would have given away the big reveal.

Of course, another perspective is that Moore didn’t tell the actors they were the Final Five Cylons because he simply didn’t know who they were going to be. And that too may have worked out for the best.