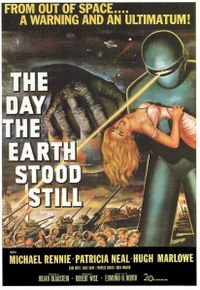 Gareth McLean of the Guardian Unlimited has posted a thought-provoking article on the renaissance of science-fiction in Hollywood and on television lately. Why has it become so de rigeur, when science-fiction has historically been the domain of Star Trek on television? Why are morally ambiguous, highly-political sci-fi shows like Battlestar Galactica and Heroes so popular.

He makes an excellent point: science-fiction is increasingly becoming a medium for creators to comment directly upon contemporary twenty-first century life. Science-fiction has always done that, of course: Metropolis looked at class divisions, The Day The Earth Stood Still dealt with the theme of man’s fearful nature through Christian allegory, Soylent Green dealt with the 70s fear of overpopulation, and so on.

But science-fiction on television now is exploring far more morally gray areas like paranoia of government, suicide bombings, religious extremism, in large part as a reaction to September 11th. And I enjoy science-fiction as a medium for these speculative analyses for 21st century life, because by extrapolating contemporary issues upon a futuristic or alien universe, we can examine them without having to polarize ourselves politically. There are no Republicans or Democrats on the Galactica, which means we — as viewers — can think about their similar problems without knee-jerking according to our political alignment.