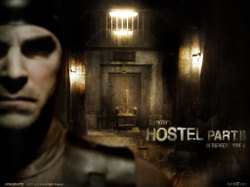 Watching the premiere of Hostel II here in New York last night, I kept thinking back to the Special People Club, the very exclusive group of people-who-matter that Heather Matarazzo’s character Dawn Wiener created in Tod Solondz’s 1996 film Welcome to the Dollhouse.

“Special People Club” is a term I’ve found myself using a lot over the years – in large part because I live in New York, where there are groups of special people just about wherever you look. Before the film started, Heather and several of the film’s other stars, along with its director, Eli Roth, filed past the cameras and spoke to interviewers. (Classic Special People Club stuff.) Then the film began, and I was pulled into a world of very, very special people indeed: those super-rich, super-nasty international business folk who pay money to torture unsuspecting American tourist kids to death.

The film is all about in-groups. The hapless teenagers who bumble into Hostel-land are, like all teenagers, strongly hierarchical in their behavior. (Matarazzo, as usual, plays the sincere-but-goofy girl who her friends don’t quite want to be associated with.) But the real inner circle of special people is, of course, the group of business-class torturers who keep up with what victims are available on their Palm Pilots as they go about their other business of playing golf and running the world. This crowd – and especially the two American businessmen who are the hopeful new initiates into the club – are portrayed so convincingly that they make the desiccated sophisticates of Roman Polanski’s The Ninth Gate look like nice people. As the two corporate go-getters talk about “taking it to the next level,” treating the horrors they are about to commit as a kind of super-exclusive executive training session, I was amazed at how convincing and plausible the dialogue sounded.

Hostel II is nasty stuff, and probably won’t appeal to viewers who have had trouble with the ever-less-subtle obsession with plain physical cruelty that so many horror films have indulged in recently (a trend started, if you ask me, by Silence of the Lambs and that cellar business at the end of Pulp Fiction). All the same, it’s a very good film, and also a horror film in the true tradition. Why? Because despite its over–the-top scenes of cruelty, Hostel II isn’t really about torture or sadism. It’s about supernatural initiation – about a journey into hell. The drill-and-saw-wielding sophisto-degenerates in this movie are really all the offspring of The Texas Chainsaw Massacre’s Leatherface – who in turn is the offspring of a figure as old as human society itself: The initiatory guardian of the underworld. The world’s myths of initiation are full of knife-or-ax-wielding figures like this – deeply scary individuals who nevertheless attract us because of the supernatural landscape they secretly stand for.