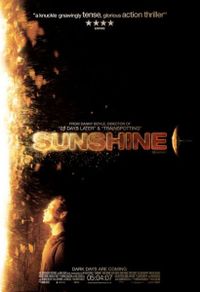 One of the science-fiction films I’m looking forward most to seeing is Danny Boyle’s upcoming Sunshine.

We’ll leave aside it’s ridiculous plot: the sun dies out and man’s last hope is to throw a nuke into the embers. Danny Boyle’s name attached to a sci-fi movie is enough to convince me it’s worth my ten bucks: this is the director who jump started the modern zombie genre with 28 Days Later, after all.

The central scientific conceit — throwing a nuke into the sun — doesn’t seem to matter much considering what Boyle’s going for anyway: it’s an exploration of the deep psychological isolation of space travel. And Boyle’s certainly citing all the right inspirations: 2001, Alien and Solaris. If he can capture half of those three movie’s existential terror, he’ll have made an incredible film.