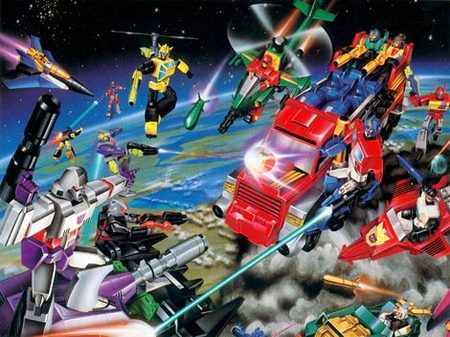 The shameful stigma of the Transformers enthusiast is something I have psychosomatically felt crawling over my skin, making me feel filthy under the eyes of my friends.

I can see them all judging me, and as I grow more and more excited by Michael Bay’s Transformers remake, I qualify my enthusiasm with a long, stuttering preamble about how I know it’s going to suck, how it’s not like I’m proud of the fact, how it doesn’t make me a low-brow, how I went to Harvard dammit and can they recite the Rime of the Ancient Mariner, because I can, despite the fact that, for me, there is no greater thrill than watching one 200 foot robot toss another 200 foot robot through a skyscraper.

But my friend Joel Johnson has posted on his blog Dethroner an excellent analogy that makes me feel better about my guilty Transformers adoration. He writes:

“It’s like when you’re gay,” I declared loudly to anyone who would listen, slurping down hunks of goulash while waving around pieces of bread to emphasize. “You come out and your parents get all freaked out and tell you that it’s just a confusing time for you but you know, deep down, or not even that deep down it could be right at the surface, that you have to have some man inside of you. Doesn’t matter if you’re ashamed or feeling guilty; you just can’t deny that ache…

In short? If you think there’s something wrong with me for loving Transformers, the problem’s not me. The issue is your own deeply-rooted Freudian repression.