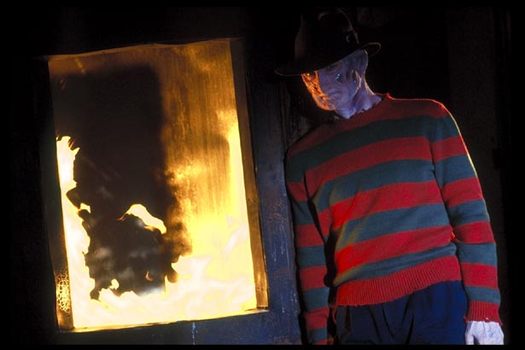 “The cellar is the safest place!” – Hothead Harry Cooper in the original Night of the Living Dead

Cellars: If I remember right, they were frightening to me even before I ever saw one in a horror film. Why shouldn’t they have been? The fact is the cellar is the most symbolic room in the house. And what it symbolizes, in a word, is hell.

When you walk down a staircase, you’re descending into the underworld. (Even if there isn’t a furnace down there – though if there is then that just makes the association all the clearer.) You’re journeying to the realm that underlies the ordinary, normal, daylight world. Just by opening the cellar door, you’re risking a release of the forces that live there. Once out, will they ever go back?

Sometimes, of course, the cellar can seem like a good place to hide. In Night of the Hunter, John and Pearl take refuge there from their extremely wicked step-father, preacher Harry Powell (Robert Mitchum). But though cellars may look like good places to hide or seek comfort for a moment, sooner or later they always end up being traps. The door at the top of the staircase shuts, and suddenly it looks like we’re going to be stuck down there forever.

“Cellar” – from the Old French celier, “underground room” – also just sounds good. Horror movies with “cellar” in their title (Beast in the Cellar, Cellar Dweller, etc.) can sound promising even if the movies themselves don’t actually deliver.

Ultimately, the cellar (or basement – another good scary word) stands for a state of mind. That’s why the best “cellar” movie of all just might be Wes Craven’s original Nightmare on Elm Street. In Nightmare, we realize that cellars – and the hell-world they stand for – aren’t just underneath houses. That dream-world/hell-world is EVERYWHERE, lurking just below the surface of ordinary reality, waiting to take it over.

A scary thought! As Heather Langenkamp discovered in Nightmare, it’s enough to drive you crazy.