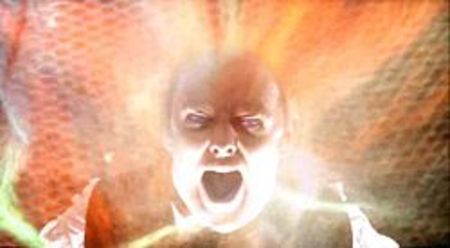 The BBC’s press office has updated their website with some pretty staggering spoilers concerning the Doctor Who third season finale. So staggering, in fact, it’s pretty hard to believe the blase nonchalance with which they just casually spill the big plot twist of the season.

So consider yourself warned: there’s big spoilers after the jump.

As a summary of the season finale of Doctor Who, titled “Last of the Time Lords,” the BBC has posted:

Earth has been conquered and the Master rules supreme, with the Doctor a helpless prisoner, in the final episode of Russell T Davies’s Doctor Who.The entire human race has been reduced to slavery, as the mighty warships of a new Time Lord Empire rise from the ashes. Only Martha Jones can save the world…

That’s a big honking development. While the Master’s reappearance is not a surprise to Brits and Bittorrenters who watched Saturday’s “Utopia,” in which Derek Jacobi outed himself as the Doctor’s most formidable foe and consequently regenerated into the form of John Simm, ihs survival undoes one of the primary conceits of the new series: that the Doctor is the only Time Lord left. The BBC description of the finale completely unravels this notion. Humanity has been enslaved and a new Time Lord Empire has risen in its place. It looks like the Doctor isn’t the only survivor from Gallifrey… just the only one who isn’t evil.