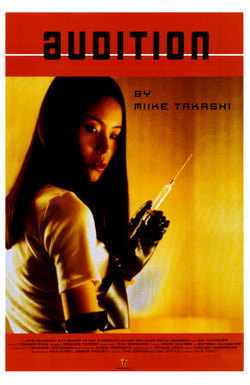 Now that both are ebbing, it’s hard to believe that the torture horror and J-horror waves had such humble commercial beginnings with a little Japanese film from director Takashi Miike called Audition.  When it hit the festival circuit in early 2000, all that was known about it was that it was a love story with a horrific climax that might disturb audiences.  Such a description actually sells more tickets than keeps moviegoers away, but even the most jaded of horror fans weren’t prepared for what Miike had in store.  Audition remains one of the few horror films of recent times that does what horror films are supposed to do: Horrify its audience, not just give them a few jolts and let them be on their way.  Miike was playing for keeps; what you saw in Audition, you kept with you for life.

What’s interesting now is that Audition is best known for its shocking torture climax, but when it was still new reviewers didn’t want to give that away to those who didn’t know.  Looking at the film today, the ending still works even though we know it’s coming, because we really don’t want to see it happen.  We understand and empathize with Ryo Ishibashi‘s lead character, a lonely widower looking for love who uses a fake movie audition to find a mate.  The first two thirds of the film are actually an almost tender love story between two people looking to connect, but as it goes on we sense that something is not right and Miike, like all the great horror directors, gives us this creepy feeling that we don’t really know what we’re in for.

Audition’s torture scene is much more frightening and unsettling than any of the films it later inspired.  I think one reason is because it’s handled in a much more matter-of-fact manner.  It doesn’t take place in some dark, dingy basement or abandoned building and the torturer takes pains not to make too much of a mess.  (Audition’s torturer also makes a "tika-tika-tika" sound that is an unforgettable torture in its own right.)

Like most great films that push boundaries, Audition has inspired a great deal of debate about its themes and characters.  Is it anti-feminist or, in fact, does the film’s sympathy actually lie with its female lead, who is seen by some as taking a stand against being exploited?  A lot of people walked out of Audition in theaters (even New York’s ritzy Film Forum had to post a warning about the content at the box office), but few genre films of recent years have had its impact.  If you still haven’t seen it, make sure you do.  Like the pizza box says, you’ve tried the rest, now try the best.