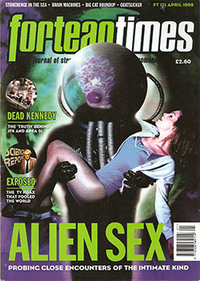 Today is not the 60th anniversary of UFOs, which have been around for as long as man has been capable of getting drunk and staring googly-eyed into the sky. Nor the 60th anniversary of aliens visiting Earth, either real or fictional: at least as far as fiction is concerned, H.G. Wells and the Amazing Stories pulp magazine had introduced the concept to the popular consciousness decades before.

But it is the 60th anniversary of the coinage of ‘flying saucer’ to describe UFOs as extraterrestrial spacecraft that may be piloted by slimy, bulbous-headed grays.

To commemorate the event, Wired has published a nice overview of the last sixty years of Flying Saucer popular history: from Amazing Stories to the rise of the Raelian Cult, from Whitney Streiber to Heaven’s Gate. Have super-evolved extraterrestrials shattered the laws of time and space to travel millions of light years for the express purpose of rooting around in a redneck’s rectum? The answer to that question is as mysterious today as it was sixty years ago, but I’ll hazard a guess: no.

Out of this World [Wired]