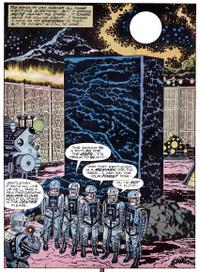 In 1976 — nearly a decade after Stanley Kubrick’s 2001: A Space Odyssey was first released to theaters — Marvel Comics quietly picked up the rights to a comic book interpretation of the film. Written and illustrated by Jack Kirby, the initial run satisfied itself with adapting the movie faithfully into comic book form, but — like Marvel’s Star Wars comic series a few years later — soon began to spin out in its own bizarre direction.

The original version of the 2001 comic was largely faithful to its source. It differs only from Kubrick’s film through the addition of dialogue from Clarke/Kubrick’s 2001 novel and an early draft of the script.

But after Marvel had exhausted the limits of the film, they started coming up with their own plots ostensibly taking place in the 2001 universe.

Issues 1-6 of the series replay the same idea with different characters in different situations, both prehistoric and futuristic. In #7, the comic opens with the birth of a New Seed who then travels the galaxy witnessing the suffering that men cause each other. While the New Seed is unable or unwilling to prevent this devastation, he takes the essence of two doomed lovers and uses it to seed another planet with the potential for human life.

If you’re interested in Kirby’s take on the 2001 mythos, check out the comic scans in the link below. Kirby was well-known for his cosmic trippiness, and 2001 was a perfect — if inexplicable — license on which to exert it.