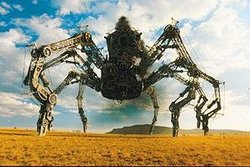 A Western that does have a giant spider in it is Wild Wild West. Follow me, won’t you, as I flail wildly to make this horror movie related.

You see, "film-maker" Kevin Smith tells a pretty funny anecdote about a script he was asked to write for a proposed-then-scrapped Superman movie.  The producer of the movie, Jon Peters, kept insisting he (Smith) make Superman fight a giant metal spider, though a spider had no connection with any of the other plot elements.

The director attached to the movie ditched the script. The movie itself, which was to "star" Nicolas Cage, got axed next, so Peters then forced the spider into his next project, the afore-mentioned Wild Wild West.

He was going to get his vision of a giant metal spider realized by hook or by crook!

That movie was an infamous bomb of almost Grindhousian proportions, of course.

So…how is this "on-topic" in a blog about horror movies?

That director who trashed the Superman spider-script was no lesser entity than the luminary known as…Tim Burton! Horror director saves the day!

Anything even partially Burton-related is totally on topic.  Back me up on that when I tell the boss, ok?