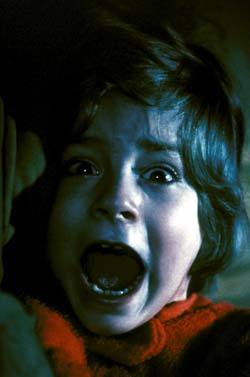 Back during the 90’s – most likely because halfway through them I came into possession of a seven-year-old step-daughter – I started to notice that I didn’t really understand kids anymore. The music they listened to, the shows they liked – even the jazzed-up, super-sour candy they ate – was all different from what I’d gone for when I was a kid.

This turned out to be the case with horror movies as well. One day, when my step-daughter was eleven, she and a friend of hers were fussing because there was nothing good on TV.  I rummaged around in my DVD collection and fished out The Shining.

Pretty scary? Obviously I was making a fiendish understatement. From the Grady Sisters to the old woman in Room 237, The Shining had completely blown my circuits when I’d first seen it on the big screen in 1980. I knew it was a bit irresponsible of me to foist such a terrifying film on a pair of innocent 11-year-olds, but somehow I couldn’t resist. My step-daughter would no doubt remember her first viewing of the film for the rest of her life, just as I had.

I busied myself with some chores, and checked in on the girls about two hours later. How had they fared? For the first time, I started to have some doubts about what I’d done. What if my step-daughter was plagued by nightmares? Was I being an irresponsible parent?

I had no need to worry. The TV was off, and both girls were reading.

“Boring? Did you get to the part with the two girls?”

“How about the old lady in the tub?”

That might have been the day I first realized that the generation gap really does exist. Back when I was a kid, my friends and I would laugh at the adults who talked about being scared when they first saw King Kong or I Was a Teenage Frankenstein when they themselves were kids. I even remember hearing, when I was eleven or twelve, that when the original Kong had first come out, people had actually run out of theaters in panic during the scene when the big ape breaks out of his chains and tears up New York. What a laugh! Sure, it was a good movie, but only an idiot would actually be scared by it.

That day with my step-daughter and her friend, I learned that idiocy is – like so many others in the world – a relative term. Unbelievable as it seemed, one person’s ultimate horror was another person’s Michael-Landon-in-wolf-makeup.