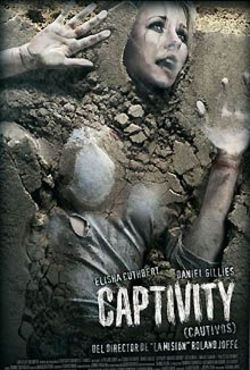 The torture plot has been pretty popular the last couple of years, and whether it’s because of a national guilt complex or because we just secretly like them, the movies are making money and more are coming out.  I guess that proves audiences aren’t "Hostel" toward what they "Saw."

And I guess that proves there is no level of depraved or obvious language-play I won’t sink to.

A level of publicity that one studio sank to follows.

Captivity comes out in late June, and here’s the pitch: Fiend captures model, makes her do terrible things and does terrible things to her.  Fade to black. Rake in bucks.

The original ad campaign caused a stir, as it featured graphic posters depicting some of the tortures; tubes in noses, gloves in faces.

The studio, After Dark Films, had to pull the ads, because they had neglected to get them approved by the MPAA, the ratings board.

Some believe the whole "shocking unapproved poster" gambit was an attention-stunt, and they may be right — we’re talking about it, devoting precious blime* to it.

They landed an "R", by the way, a rating people buy tickets for, and they drummed up tons of press.

So, there’s no way of knowing when the torture craze will end, but the wild publicity wheels keep on rolling like a wheel-barrow full of cash.