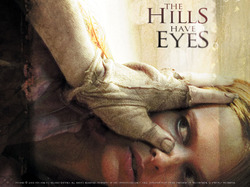 “I was alone with fifty or sixty of those things just… staring at me.” – Ben (Duane Jones) in the original Night of the Living Dead

Being watched is creepy. Just ask Psycho’s Marion Crane (if you can find her) about that hole Norman made in the wall of Cabin One # 1 of the Bates Motel. Or check with the unhappy family who blundered into the terrain of Wes Craven’s voyeuristic hillbillies in The Hills Have Eyes.

If being watched is creepy, so is watching itself. The audience of a horror movie is guilty by association. Why do we want to look at all this awful stuff? That’s one reason why directors so often seem to take a special delight in putting us in the heads of their monsters or malefactors. Seeing the world through Freddy or Jason’s eyes makes us twice as uncomfortable about what they’re doing as we would be if we only saw them from the outside.

Not that directors always tell us outright when they’re showing us the world through the eyes of the scary characters. Those majestic helicopter shots that open The Shining don’t just look great; they suggest that invisible, ghostly presences might just be following Jack Torrance already as he pilots his VW bug toward the waiting Overlook.

The only thing scarier than an eye that’s staring at you is an eye that shouldn’t be staring at you… because it’s dead. That brings us back to Janet Leigh of course, who will tell you in her memoir just how hard it was getting that shot of her open-eyed face mushed against the bathroom floor in Psycho. Then there is the matter of zombies — who, being dead and alive at the same time, look at you without recognizing you… at least as anything more than a potential meal.

Finally, there are those dolls and puppets that stare at us in movies like Poltergeist and Magic. They don’t even HAVE real eyes.

Which makes the fact that they, too, can see us all the worse.