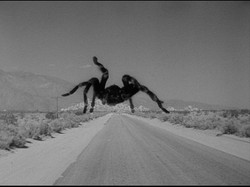 Many of you, perhaps, first heard of it from the line in the song Science Fiction Double Feature.  You know:

"I knew Leo G. Carroll was over a barrel when Tarantula took to the hills"

This is the spider they’re talking about, but there’s nothing too musical about eight legs of rear-screen projected death, baby.  While you’re humming the words, he’s chewing you up!

The movie helped define the Giant Insect genre that Them! sketched out (except the ants in Them! are actually insects, and spiders aren’t (as any school kid anxious to annoy will point out)).

Those 50’s folks sure liked ’em big. It was the atomic age, baby, and if nothing else an A-bomb will enlarge your bugs and lizards for ya.  Tarantula is still worth watching for the scene in the lab with all of the enormous animals, pure drive-in delight.

Leo G. Carroll, by the way, is so much more than just a cheap rhyme with barrel.  He was also the star of the TV series Topper which featured a stuffy stiff who could see dead folks.

Can’t one of you maverick backyard indie horror film kids I keep reading about make a movie about giant ghost spiders?  Thanks.