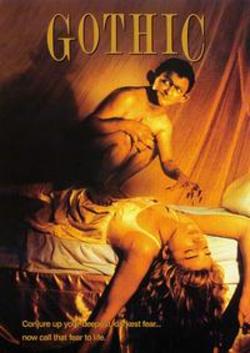 Here’s the pitch.  Dig this plot.  Our story is set in the early nineteenth century.  Corsets, wigs, the whole deal.  A volcano erupts and blots out the sun.  The world freezes, multitudes starve as crops are covered in snow.   Five folks retreat to a remote estate in Switzerland to wait out the fallout and take turns telling terrifying tales, each more terrifying than the last.

They consume laudanum, a kind of nineteenth century…energy drink, chase each other around the dark halls of the mansion and challenge each other to write the greatest horror story ever told.  When the world thaws, the results are the first modern vampire tale and the first science-terror novel.*

Surprise!**  The story is true!  It’s all about the "Year Without a Summer," and normally when you hear a true tale like that, it’s followed with a "Hollywood threw the script away, since no one would believe it!"  But, throw the script away they did not!  In fact, they kept two of them and rolled ’em out hot on the heels of one another.

They were Gothic and Haunted Summer and if you can watch them back to back, it will be the magical Summer that changes your life forever.  Those "stories" the main "characters" cranked out defined the way we talk about and tell about the things that scare us.

If they made a few more movies from the same subject matter, we could have a whole poll on who the best cinematic Lord Byron is.  While we’re waiting, though, check out the poll you helped create.  Poll Link!

**I know you’re not really surprised, but you can be a blog pal and pretend.