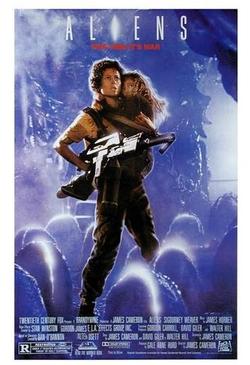 We sure devoted a lot of blog time, what I like to call "blime", to that super-hero movie on account of my, perhaps, half-baked theory that it was a horror movie in disguise.  It sure had all of the elements we expect from our genre of choice.  There were sudden surprises, creepy monsters, musical stings and distressed teens. It had the Evil Dead’s director for Ash’s sake.   It ends up, though, it was pretty hard to pin down, since it was a wild patchwork crazy quilt of every conceivable class of storytelling, even sixties beatnik flicks and Douglas Sirk-type tear-jerkers.  It can’t be pinned down, ’cause pinning’s for butterflies, baby, and that crazy talkie was all spider.

Still, there should be some discussion as to what happens when bits from one type of movie get combined with another to form something either brand new or totally enhanced.

Aliens is one of the coolest adventure films of all time, Dawn of the Dead is a political satire on consumerism, but both are super-scary and rank in the top twenty horror movies ever.  You start with the template of one type of movie, then you add the best parts from others and you hope you get something close to what you set out to make.  Too much in one direction, and you get typed a different way, and people seem to need to type.  Audiences are like a whole pool of secretaries, baby.  Folks want that short-cut to thinking that leads to the quickest time possible in the video store (do they still have video stores?). Starship Troopers is a sci-fi horror satire comedy gore-fest.  You can’t pigeon hole it, so where do you shelve it?

Ultimately, it’s up to you to decide what goes where, and that’s never more true than in our Reader’s Monster Poll.  Check it out. Vote it out.  There are all kinds of monsters on there from sci-fi movies, plain old thrillers and even a Best Picture.  Maybe after we sort it out, we can come to some kind of group definition where we all agree.  Or maybe that would make us Pod People!  Click on that poll link, it’s blime well spent.