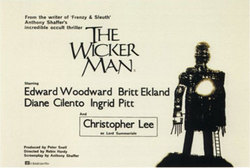 That’s a line I used to hear a lot back in my early 20’s, in the years when video cassettes were first becoming a fixture and it was suddenly possible to bring movies – in particular, horror movies — home for repeated viewings.

Horror fans like me are a little like those dead people in The Sixth Sense who, not knowing that they’re dead, keep doing the same thing over and over again.

Even before the technology arrived to allow people to indulge their desire to press the rewind button, horror movies were one of those genres that called out to be seen more than once. In the old days, you just had the added task of talking one of your parents into driving you back to the same crummy theatre they drove you to the weekend before.

Of course, psychologists are ready with an easy explanation for this desire to return, and return again, to the scene of the horror. We long to control that which frightens us, they say.

Fair enough, but at the same time I also think there’s more to it than that.

A good horror movie doesn’t just scare you – it reminds you that the world is a bigger place than you thought it was. The first viewing of a horror film is for getting scared. But the second, third, fourth – and twenty-fifth – viewings are for something more mysterious.

That’s one reason so many good horror movies – The Wicker Man comes to mind – feature rituals of one sort or another. Horror movie watching itself is a ritual: one in which the victim that gets sacrificed is our ordinary, hum-drum mindset – our assumption that the world is a bland and predictable place where we always know what’s going to happen next.

So when my own life is feeling a little too ordinary and predictable, I know where to go. Like the Creature from the Black Lagoon returning to the healing waters of his underground cave after taking a spear-gun shot to the ribs, I take solace in a horror movie – and I feel better.