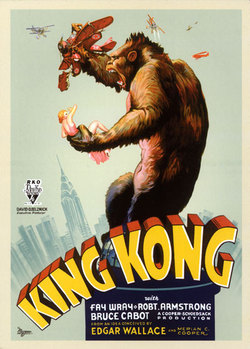 Our User Nominated Monster Poll has been up for a few weeks and the results are telling an interesting story.

The top five as of today are: King Kong, The Blob, The Pod People, Leatherface and Norman Bates.  The most recent of those is thirty years old (Pod People, 1978) and all of them are from movies that have been remade.  The Pod People, in fact are from a rema*e.

The bottom three are Leprechaun, The Worms from Slither, and that insect thing from Mimic.  Those are all original movies from the last ten years.

Does this suggest originality is being punished?

Take the leap and find out

It’s tempting to read into it that because of re*akes, people are more familiar with the monsters in the top five and are voting for what they know, and it makes you wonder if it’s that kind of data that makes the studios think that remak*s are what we want to see.

The movies at the bottom are original characters, and in the case of Leprechaun and Mimic generated sequels, but seem now to be held in low regard.  Does the passage of time make characters seem scarier? Does being from the recent past make monsters seem less scary?  Based on these numbers, there seems to be no reason why there are four Leprechaun movies, but there are.

The magic number seems to be thirty years.  Psycho was remade roughly thirty years after it came out, and so was the Blob.  All of the re*akes in theaters now are from the late 70’s/early 80’s.  Is it because kids grow up hearing about what scared their parents and want to be scared by it too when they’re old enough, but in color and with better effects?

I don’t know, but I do know that the numbers on the poll paint a picture that suggests we’ll be seeing a re*ake of Pitch Black in about 20 years.  Watch for it!