This browser is supported only in Windows 10 and above.
Posted by Eugene Hernandez / indieWIRE on May 20, 2007 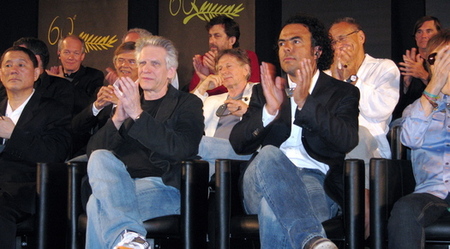 There were no easy answers about the state of cinema on Sunday when
Cannes welcomed some of the world’s leading filmmakers to celebrate the
festival’s 60th Anniversary. Filmmakers that participated include: The Coen Brothers, Takeshi Kitano, Atom Egoyan, The Dardenne Brothers, Wong Kar Wai, Claude Lelouch, Olivier Assayas, Jane Campion, Chen Kaige, Gus Van Sant, David Cronenberg, Hou Hsiao-hsien, Alejandro Gonzalez-Innaritu,
and many others.
Frustrated over the questions posed by journalists during an hour-long
discussion featuring the thirty or so filmmakers, director Roman Polanski
walked off the stage near the end of the session. The move created a
particularly awkward public moment as the Cannes formally commemorate
its anniversary on Sunday. Even before his early exit, Polanski was the
center of attention during the discussion, fielding numerous questions
and then engaging Atom Egoyan in a debate about the
future of cinema. (For AMC’s interview with Polanski in which he talks
about Rosemary’s Baby and his feelings for Hollywood, click here.)