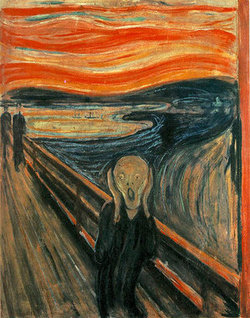 Everyone’s had an experience where they see an actor and remember having seen him in another movie, and if you care about that kind of thing (as most of you do) you begin to recognize the names of directors and follow them around from film to film.

There are also situations and themes that you recognize when you see them pop up.  Movies with similar plots come out sometimes quite near one another.

It’s rare, however, that you begin to recognize a specific sound effect used over and over again, but once you’re familiar with the "Wilhelm Scream", you can’t miss it.  It becomes as familiar to your ear as Brad Dourif is to your eye.

Here’s a link to a compilation of famous scenes featuring the exact same scream: Augggh!

And here’s a link to an in-depth history of the scream: Scream On!

It’s that rarest of treasures, a cult sound effect.

Once you hear it, you’ll realize you’ve been hearing it all your life, and if you happen to be in a theater, you can turn to your friends and say, "Do my ears detect a visit from our old friend Wilhelm?" and your friends will think you’re the coolest thing to ever happen to them.  Probably.