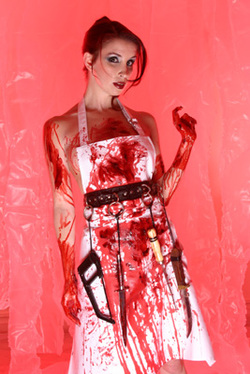 Last night I was on the set for a horror video with Noel Francomano.  The location was a Manhattan office building after hours, but it was still teeming with people. They call it the city that never sleeps, since everyone has to work the night shift in order to pay the rent.  The script called for a big scream scene, and there was some concern it might…disturb the employees.

There was the usual "magic behind the magic" set-up with lights being readjusted and rescrewed, sets being dressed and re-dressed and the actress trying to keep still while the crew buzzed around her, teasing her hair and asking her to lean forward or backward while they framed the shot.

The decision was made to shoot the film out of sequence, which means, of course, they would be recording an event that happens late in the finished movie early.  I was told you always save the scream for last.

All of the silent and "inside voices" shots were set up and recorded, and it was time for the ol lung burster.  The director called "Action!" and there was a moment of perfect silence, even the fax machines and printers seemed to be holding their electronic breaths! Then, Noel let loose.

It was pure, piercing primal terror sound.  The girl who had been sitting quite calmly, boredly making little horns out of scotch tape was suddenly shrieking.  When she stopped, everyone burst into delighted laughter.  It was shocking and funny and cool and loud.  There were four more takes, microphone shattering banshee wails, and Noel was free.  Her throat was a little raw and I was told the two reasons why you save the scream for last.  One, you don’t want to have the actress’ voice ruined for the talking scenes, and Two: You don’t want any heroes charging onto the set looking to "rescue" someone.

Reason number Two wasn’t an issue last night, though.  No one peeked in, no one came to see if everything was all right, even though very few folks knew a video was being shot.  Wild.  I reckon screams are just New York room tone.