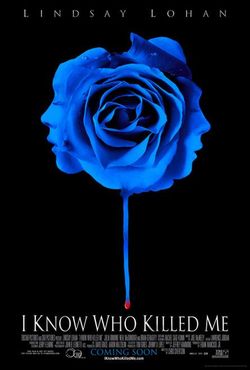 Like horror movies?  Like disco?  Then check out this wild trailer for I Know Who Killed Me by clicking…here.  We could watch the trailer, but we couldn’t enter the site, maybe you’ll have better luck.

If you watched it, you may have found it strangely compelling and found yourself struggling to compare it to something else.  That’s what we do, you see.  We want originality, but we also want a movie to be put into a category we understand.  We’re sort of frustrating that way.

Take the leap for more thoughts on this and for either the best or worst pun in blog history!

You got your blue rose which was a Twin Peaks thing, and you got your, by now super-familiar, plot where you don’t know if the main character is:

1) crazy and imagining half of the movie

but despite that straw-grasping, it looks sort of…new-ish.  Unless it’s like that Will Ferrell movie we couldn’t bring ourselves to rent.

Maybe I’m just hypnotized by the flashing disco ball (which makes the early part of the trailer seem like the Dazzler movie we’ve been clamoring for), but I’m kinda glad Lindsay "lohaned" her talents to this one.  Her voice has that kind of husky amnesiac quality that sells it for me.

Does everyone make that loan/Lohan pun, or are we the first?  Please say we’re the first.

Wait!  Maybe it’s like that The Invisible movie no one went to last month.  The one where the guy is sort of dead but not really until he solves his murder?   There, I feel better, I found something I think it’s like, but that’s a hollow victory, goatlings.    I should be open to new things.