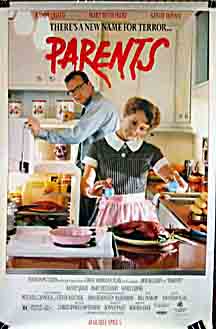 "Dad, do you feel bad?" — Danny to Jack in The Shining

Parents. They’re always letting you down.

And nowhere more than in horror movies. Even when it isn’t a character’s actual mother or father who’s being bad, fantasies about monster parents provide the secret psychic charge behind many of horror cinema’s greatest moments.

“Mrs. Bates?” says Vera Miles in the climactic scene of the original Psycho, as she approaches what seems to be a (somewhat) normal old woman sitting in a rocking chair. That tentative hopefulness in Miles’s voice (and the scream that follows right after) says it all.

The same thing happens in Herk Harvey’s long obscure but now famous original version of Carnival of Souls, when Candice Hilligoss, plagued by her fears that she is being pursued by an anonymous man, runs into a kindly doctor who offers to help.

Candice pours out her heart to the doctor – who’s clearly a father
figure – as he sits with the back of his big black leather chair to
her. Then he swivels his chair around and reveals himself to be… the
sinister man himself.

Of course, there are just as many actual monster-parents in horror
films as there are symbolic ones — two of my favorites being the
sausage-loving mom and dad that Randy Quaid and Mary Beth Hurt play in
Bob Balaban’s 1989 masterpiece Parents.
But whether the bad parent is real or symbolic, the horror usually
turns around that all-important moment when we suddenly discover that
we have been LET DOWN. We made a decision to trust these rotten folk —
to turn to them at our weakest and our most desperate — and boy were
we wrong to do so.

No discussion of bad parents in horror movies – even a 400-word one
– would be complete without a mention of that curiously effective
reversal of the theme in which the child becomes the
familiar/comforting figure who suddenly turns monstrous (my favorite
example being innocent little Kyra Schon eating her dad in the original Night of the Living Dead).

By the way, as might be apparent by now, Night is my favorite horror
movie. But that doesn’t mean I’m not ready to admit that some of its
best ideas came from earlier films. Everyone knows, for example, that
cannibalistic Kyra’s direct ancestor is that little vampire girl who
shows up at the door in Ubaldo Ragona’s flawed, goofy, but sometimes
fantastically atmospheric and scary 1964 adaptation of Richard
Mattheson’s I Am Legend, The Last Man on Earth.