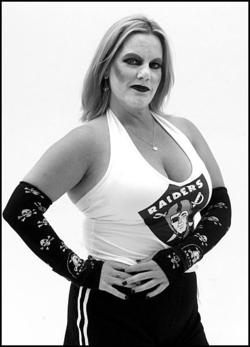 Over the weekend the Yankees played the Mets, and before you non-sports fans tune out, I’ll quickly tell you there is a relief pitcher for the Yankees named Michael Myers.

Now, on the off chance you’re a sports fan who happened to catch this by accident, Michael Myers is the name of the killer in the (endless) series of Halloween movies.

So…where our paths cross is this:  When Myers the player comes out to pitch, the stadium blares John Carpenter’s original theme music from Halloween (1978), which is totally cool and unexpected.  How often do sports and horror movie’s mix like that?

You’ve got your Raiders fans, of course.  Like the lady pictured, they dress in wild "death pallor" makeup, spiky skull armor and weird, monstrous face plates.  They’re like extras from Army of Darkness, and they want to be.

Coming from the other direction, Jason wears a hockey mask.

So, since we’ve got an example of sports folks using horror images and horror folks using sports images, let’s make a sports-horror movie.  The closest I can think of is The Fan (where DeNiro stalks the baseball player), but that’s more of a thriller, really.

Drop us a line if there’s horror crossover in your local sports franchise, and if you can hip us to any "sporror"* flicks.  We want to know the score!

*What do you want? It’s better than "horts".