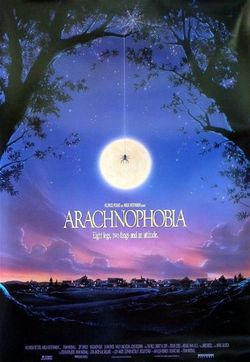 I think the love of spiders is called arachnophilia, and that driving force of passion is going to flood a bunch of theaters tonight at midnight when that secret horror film Spider-Man 3 starts rolling.

Arachnophobia (1990) was advertised with the line, "Eight Legs, two fangs, and an attitude," and if that’s not a perfect late eighties/early nineties, Andre Agassi, NKOTB-type call to action, I don’t know what is.

I think that’s the same time period where they were adding "from hell," to everything.  They’re spiders…from hell.  I just got back from a wedding…from hell.  I reckon when times were good, the horror movies were funny and the expressions had a fake-cynical bite…from hell.

This squirmer had jumps and gross outs aplenty (look out they’re coming up from the drain!) a poster that evoked Charlotte’s Web* and a sort of Aliens twist at the end.

I think it was intended to be in that genre of funny horror movie where you laugh because you’re nervous, but every thing’s ok, right?  Kind of like Gremlins, but with out a friendly spider-pal.

That would have been extra funny, if there were a "good" spider who helped them find the queen.  Oh, man.

I reckon you want the hot side hot and the cold side cold.  If it’s too funny, it aint a horror movie.  If it’s too scary, it aint a comedy.  The "horromedies" that work best are the ones that seem like they’re comedies set in horror films.  You know, like Shaun of the Dead and Return of the Living Dead.

You know what, we need to work on a hard definition for "horror movie."  We’ve been hinting all week that Spider-man 3 is a secret fright flick, but haven’t said exactly what that means.  Well, you’ll be getting that definition with both barrels, goatlings…after I see it.  Tonight.  At midnight.

The book Charlotte’s Web, by the way has a total horror-movie first line.  To whit: "Where’s Papa going with that axe?"