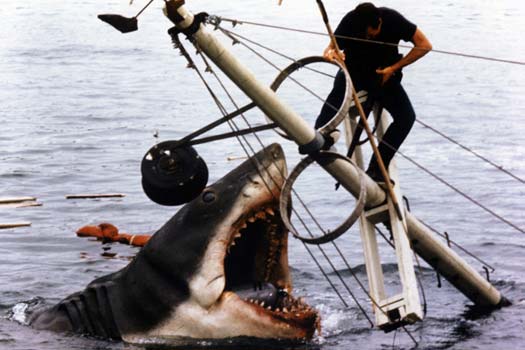 Getting eaten alive is no treat, but it’s a popular fate in horror films.

There are a number of ways to go about it. You can go down whole (as Robert Shaw did with Bruce the mechanical shark in the original Jaws) or in a million tiny pieces – as the victims in the Jaws knockoff Piranha preferred to.

Or – and depending on your tastes this might just strike you as an even worse fate – you can be eaten not physically but psychologically, as the victims in so many classic haunted house films are. Though bodily he’s left intact, the Overlook Hotel basically eats Jack Torrance (Jack Nicholson) alive in The Shining. By film’s end, he hasn’t been killed by the hotel so much as absorbed into it – “forever and ever and ever.”

The same thing happened to Julie Harris in 1963’s ten-times-scarier-than-the-remake version of The Haunting. Hill House is even more of a living entity than the Overlook, and Harris’s character (who’s described in the movie as “live bait” for the house) has no more of a chance of escaping it than a rabbit in a cage with an anaconda.

Speaking of anacondas, the world is still waiting for a CGI snake that’s half as creepy as the real-life reptiles that did the people-eating in 1972’s fashionably green exploitation bonanza Frogs.

Why is being eaten so scary? Probably because it’s not really such an irrational fear to have. That’s why 2004’s Open Water worked so well. Blanchard Ryan and Daniel Travis’s innocence about the kind of shark-eat-person world they live is one we all share to some degree. Ryan especially should have been on the alert, considering that her character’s name in that film — Susan Watkins – seems awfully close to another young woman who chose to remain blithely ignorant of the ocean’s dangers. Bruce the shark’s first victim in Jaws was named… Christine Watkins.