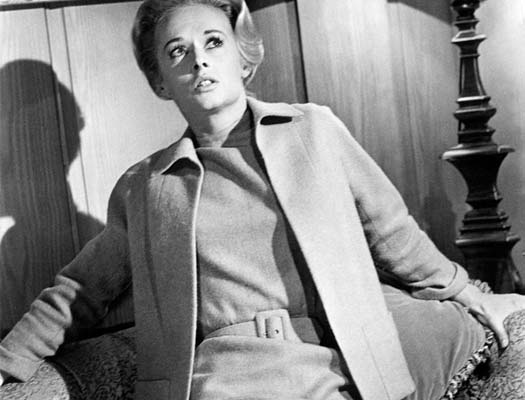 “There are a lot out back, too.” – Ben in the original Night of the Living Dead, just before the hands-through-the-wall scene.

When I was a kid in the seventies, the first category by which my friends and I judged a horror film was how many times it made you move. If you didn’t flinch or scream or jump or cover your eyes at least a couple of times, it couldn’t have been much of a horror movie.

The Birds – which played a lot on late-night TV back then – was problematic as a horror movie as there was an awful lot of Mitch-and-Melanie nonsense to put up with in between the action sequences (Who cared what really happened in that stupid fountain in Rome?). But ultimately, The Birds was a good movie because it had, late in the game, a really good flinch point – a moment that got a reaction even if you had seen it once or twice already.

(Find out the flinch point after the jump.)

The moment comes when Mitch’s mom goes out to the Fawcett Farm and
finds Dan Fawcett with his eyes pecked out. Even back in fourth grade,
my friends and I were able to pick up on how tricky Hitchcock was in
giving this scene no accompanying blast of music. As the camera jumps,
rather than zooms, in – close, closer, closest – the total absence of
sound made it all the scarier.

Semi-effective flinch points are fairly easy to come by. After all,
in order to make one all you have to do is say "Boo!" to the viewer.
But a really good flinch point is more than just a surprise — it’s a
revelation.

The two all-time greatest flinch points of my childhood movie-going
days? The hands-through-the-wall scene in the original Night of the
Living Dead, and – a few years later – Ben Gardner’s water-swollen head
bobbing into view as Richard Dreyfuss is poking around under his boat
in the original Jaws. (Both films are, of course, heavy with other
high-quality flinch points, and in the extra material that comes on the
DVD versions both directors talk about all the sweat that went into
making them work so well.)

If you ask me, flinch points generally aren’t what they used to be
these days. But every once in a while I’ll see a horror movie that
still manages the trick (semi-recent example: the surprise flash cut to
the girl in the closet in The Ring). Old and jaded as I am, I’ll jump
back in my seat – and remember why I bothered to show up in that seat
in the first place.