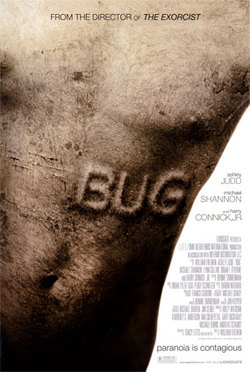 Bug opens in a few weeks (May 25th) and it’s been generating a lot of discussion about what sort of movie it actually is.

The trailer is here, so you can see how they’re marketing it.

From that, (I’m assuming you watched it), it looks like it might be a motel movie like Vacancy or Identity, or a plague movie like 28 Days Later which, we’ll digress for a moment to mention, saw its sequel  28 Weeks Later have a pretty decent opening over the weekend.

They’re also pushing that it’s from the director of The Exorcist
(William Friedkin), which seems to indicate they want pretty badly for
us to associate it with "horror."

However, they don’t go out of their way to mention that it’s based
on an Off-Broadway play (which might be why it looks like it’s set in
one room – easy to stage!) or that said play is a psychological drama
about paranoia and guilt.

Soooo….it looks like it’s going to be pretty interesting, but it
looks like anyone going into it expecting cats to be leaping out of
closets or monsters or even masked hack-masters will probably be
disappointed.

Monsterfest is preparing you.  It’s a horror film in the way that Repulsion
is a horror film, one of those internal struggle,
wrestling-with-inner-demons type of flicks, and those aint the type of
demons you call in a priest for.

You have been warned.