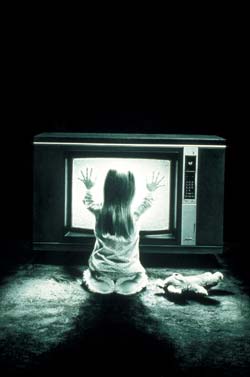 With Memorial Day approaching, I’ve been thinking a little about the idea of holidays. For some people they’re fun, for others a challenge. What to do with all that extra time?

I, for one, tend to celebrate all major holidays by popping in a horror movie. Not a new one, but one of the standards.

I used to think this was weird, until I discovered that many another horror fan does the same thing (Okay, maybe it’s still weird, but at least I’m not alone.)

In fact, my willingness to choose from a half-dozen or so different movies (Night of the Living Dead? The Texas Chainsaw Massacre? The Shining? Maybe even a good second-tier choice like The Ring or The Omen?) makes me somewhat relaxed and freewheeling compared to some other fans out there. Some people have one, and only one, film that they like to watch on holidays – just as some other fans watch a certain movie once a week – often Friday night — EVERY SINGLE WEEK OF THE YEAR.

Why do horror films and holidays go together so well? One reason, I suspect, is because they’re really about the same thing. Holidays are a break in ordinary time – a moment when we leave the ordinary calendar of events behind. Horror movies are too. That’s one reason why so many horror films actually take place on or around holidays (Black Christmas, anyone?). The ordinary world – with its ordinary rules and certainties – falls away in a good horror film. We get plunged into pure chaos. It’s scary, but… it’s also great.

At the end of a really good horror film, I always have a little trouble getting my bearings – finding my way back into the ordinary world. Like Jon Voight at the end of Deliverance (a genuine horror film, if you ask me), or Heather Langenkamp at the end of the original Nightmare on Elm Street, I feel for a moment like I’m in two worlds at once. The ordinary, everyday world where ordinary, everyday stuff happens. And… that other place, where time stops, the rules go out the window, and anything is possible.