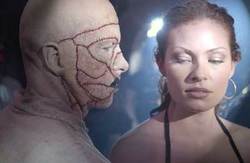 Uwe Boll. Does the name ring a bell?  It does if you mean the bell at a boxing match!

The director of such films as House of the Dead (pictured) and Alone in the Dark has a pretty rabid anti-fanbase. He generates a lot of negative criticism, and his last three movies are all in the Bottom 100 on imdb.

Instead of taking the criticism quietly, he actually challenged his anonymous critics to a boxing match — an actual physical fight, a backyard brawl, a hand to hand dust-up.

As you can see from the link above, the fights happened, and, as you can also see, he wins pretty convincingly. They’re intended to be featured in the backgrounds of his new movie, Postal, which is getting great early reviews.  Like this one!

Can it be true, can he have reversed the trend and made a crowd-pleaser, or have the naysayers been literally beaten into submission?

All I know is, this bird’s keeping his beak shut when it comes to reviewing Boll films. My right cross has gotten a little slow.