This browser is supported only in Windows 10 and above.
Posted by Eugene Hernandez / indieWIRE on May 25, 2007 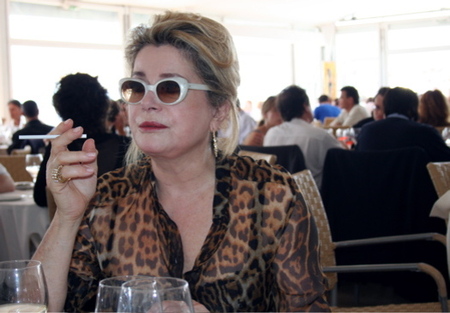 "Persepolis," the animated Cannes competition entry from France, has
stirred awards talk here since the film’s debut earlier this week. On
Thursday, leading French actress Catherine Deneuve joined her daughter
Chiara Mastroianni and the film’s writer/directors Marjane Satrapi and
Vincent Paronnaud at the Carlton Beach restaurant for a Sony Pictures
Classics lunch. Deneuve, who voiced a character for the animated,
French-language adaptation of Satrapi’s succesful books, will also
perform the role in English for an alternative version of the film.
Asked about recent talk in Cannes this year about the apparent "death
of cinema," while sipping a glass of wine and smoking a cigarette,
Deneuve was straightforward on the matter. "I’ve heard that for such a
long time," she said of the death of cinema, adding wryly, "It’s a very
slow death." Concluding the thought, she added, "It is still very
alive, I think."

[Catherine Deneuve, in Cannes on Thursday. Photo by Eugene Hernandez/indieWIRE]