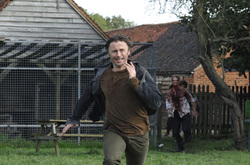 I caught 28 Weeks Later over the weekend. It takes the premise of the original movie and finds fresh ways of exploiting it. One scene is a small masterpiece, when citizens are rounded up in a dark underground parking lot and one of the infected gets in.

The film also makes clear the "victims" are infected with a disease; they are not zombies.  The early scenes have scientists talking about finding a cure, and victims don’t die as zombies do, before become raging, flesh-eating maniacs.

28 Days Later was the first film to bring up the "running zombies" controversy (are fast moving flesh eaters who aren’t dead really zombies?).  There have been many debates over this issue and friendships divided over it, but I feel the need to draw a line in the sand and declare there is no such thing as a "Fast Zombie."

Think about the first scene in Night of the Living Dead: Johnny teasing his sister, "They’re coming to get you Barbara," pointing at a stranger walking across the graveyard that, unknown to him, really is coming to get them.  It’s one of the greatest opening scenes in horror film history.  If that zombie had been barreling down the tombstones like a Steelers halfback, the entire tone of the film would have changed forever.

No one is denying that fast-moving creatures are scary.  But one of the things that makes a zombie is that, in its lumbering approach, they seem almost harmless — but really aren’t. Readers are welcome to offer their opinions on this important issue below.