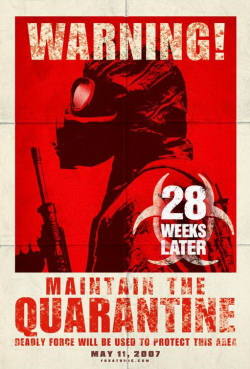 Five or six years ago there were only a few hardcore zombie movie fans, and then suddenly everyone was infected.  Was it because 28 Days Later was so awesome?  What was the tipping point?

I say it was video games that brought zombies back from the fringes, the Resident Evil series, and who would argue?

Seemingly overnight, Zombies are the new pirates.  Your Uncle Frank leaves the eyepatch behind and starts doing the "braiiins" groan at parties, there are metric truckloads of Z-flicks and cultural references and a few ZomComs (Zombie Comedy, natch!).

They even have their own newspaper: Extra!  Extra!

That’s totally worth clicking, by the way.

28 Weeks Later is coming soon soon soon, and while I reckon an infection that makes you act like a zombie and transmit it to others like a zombie doesn’t technically make you a zombie, I’m betting Uncle Frank will be in the front row.

Right now Zombies are number two on the Monster Poll.  See if you can push them past Godzilla!  Then send pictures of a zombie Godzilla to vex his backers!  That would be crystal skull cool!